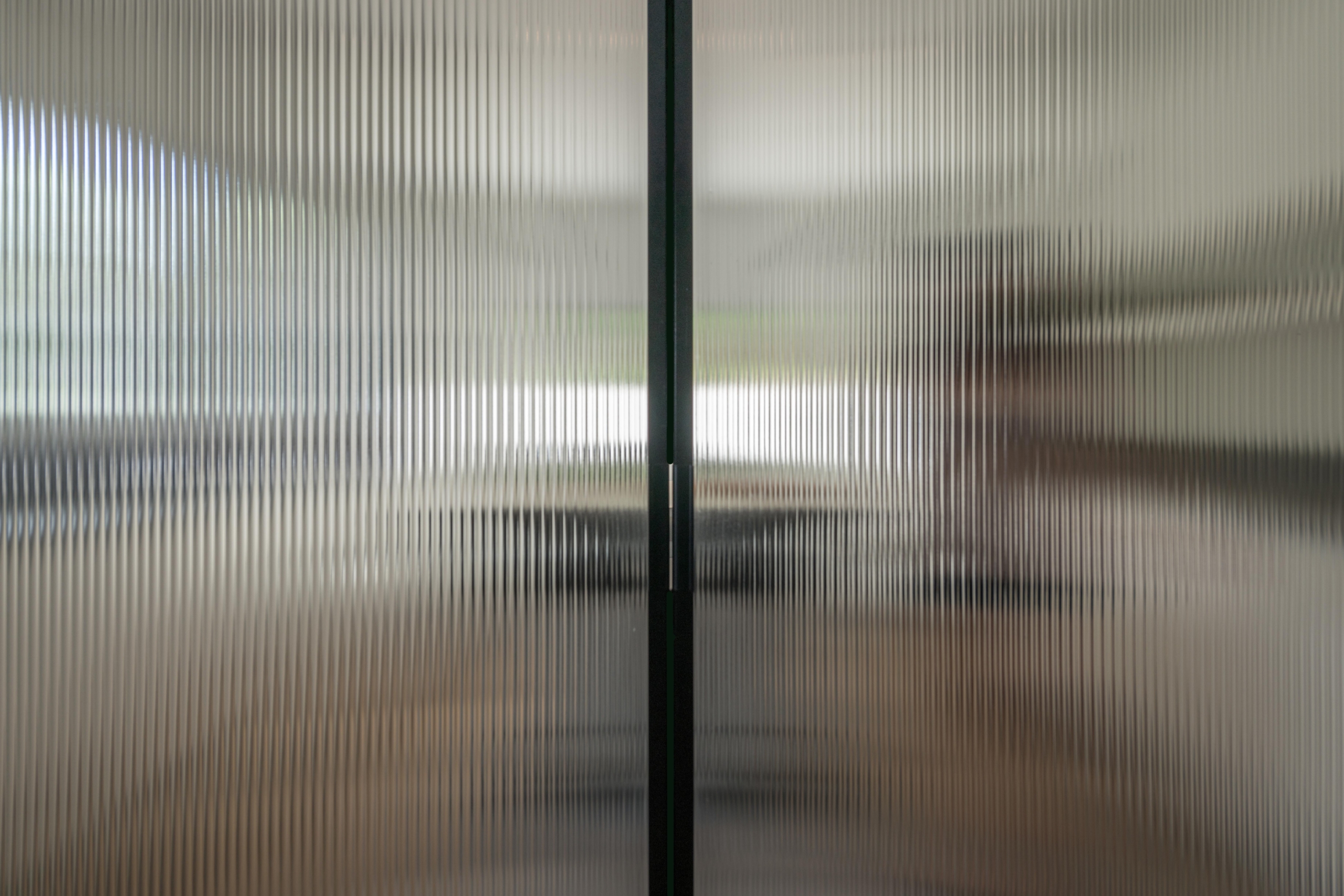 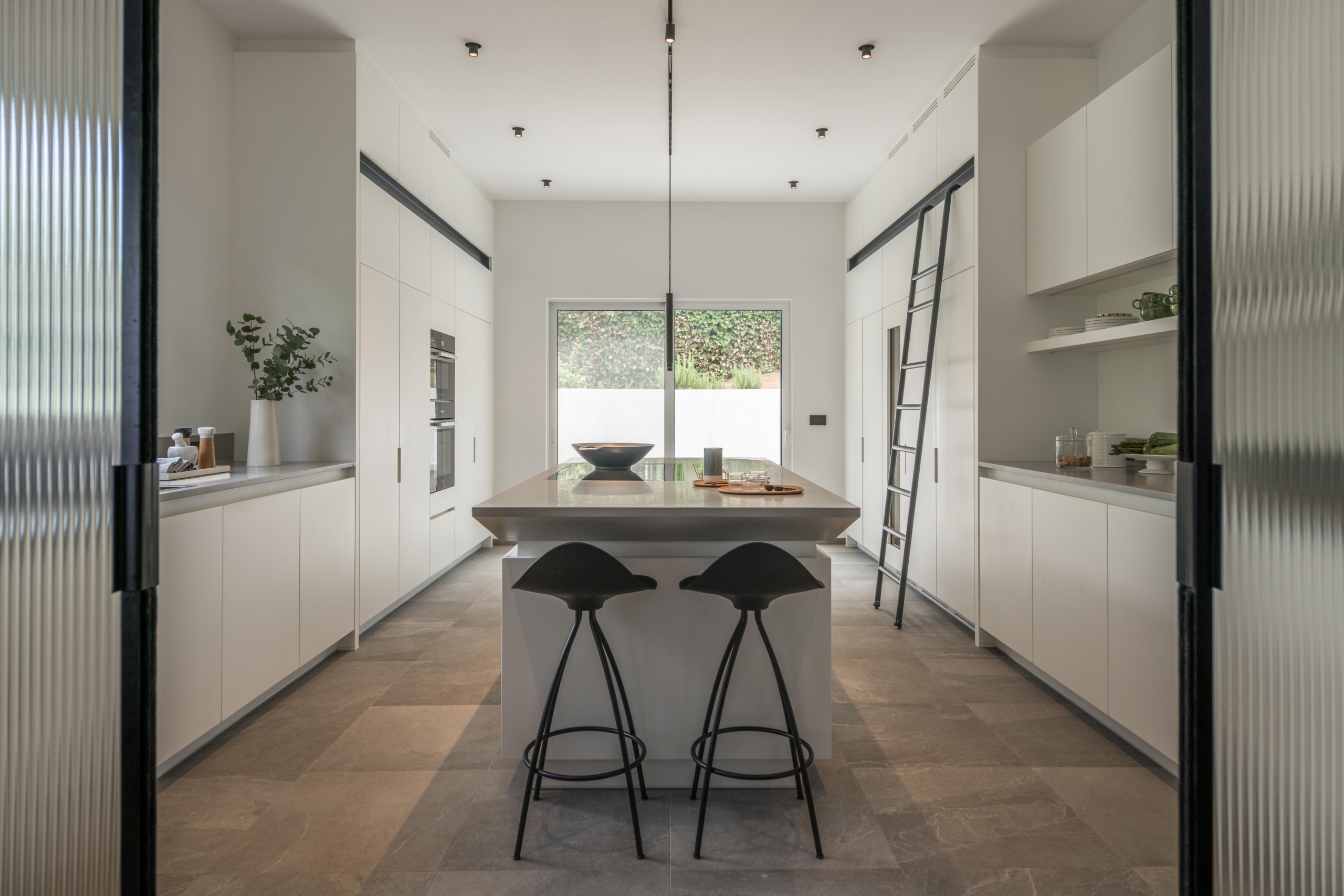 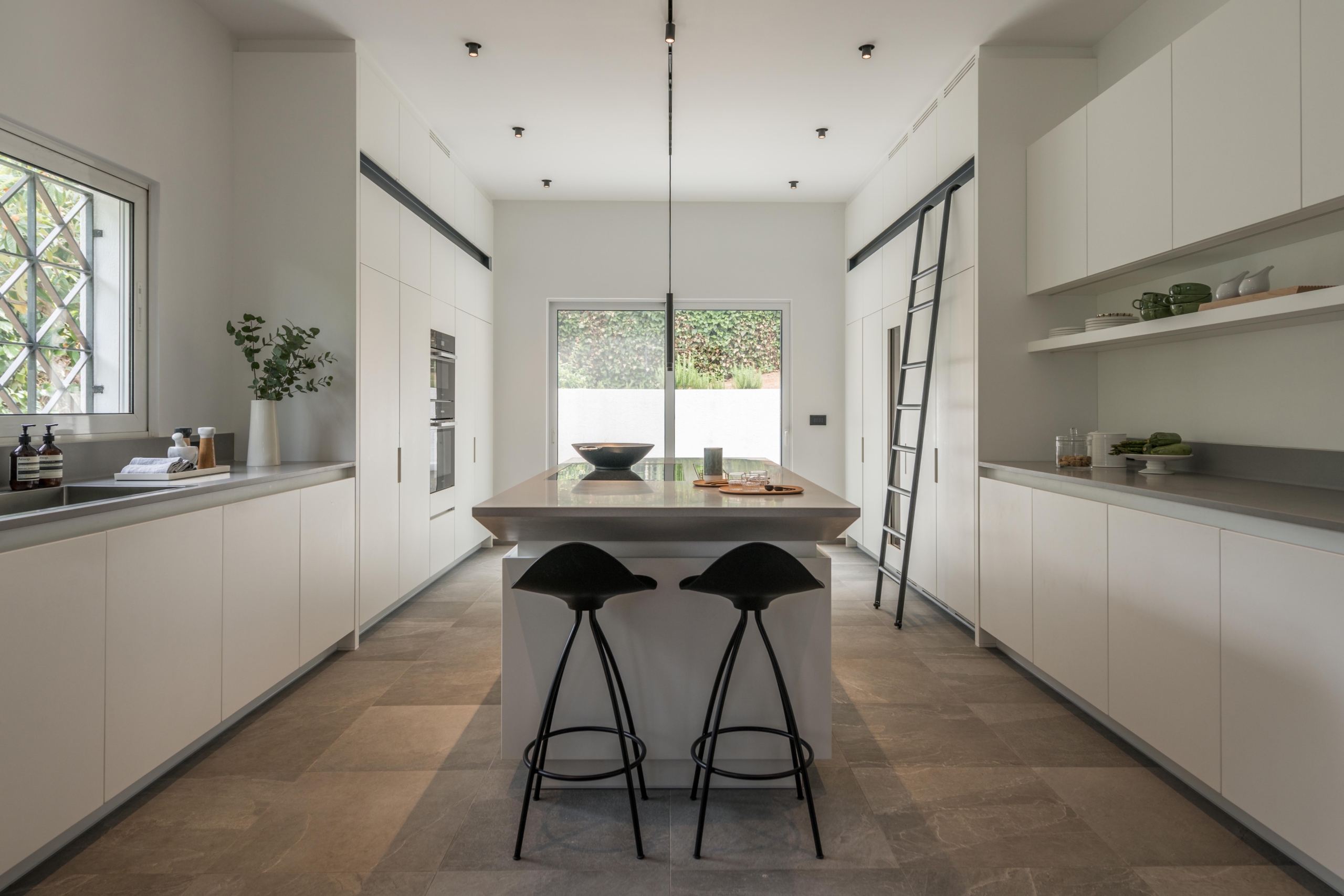 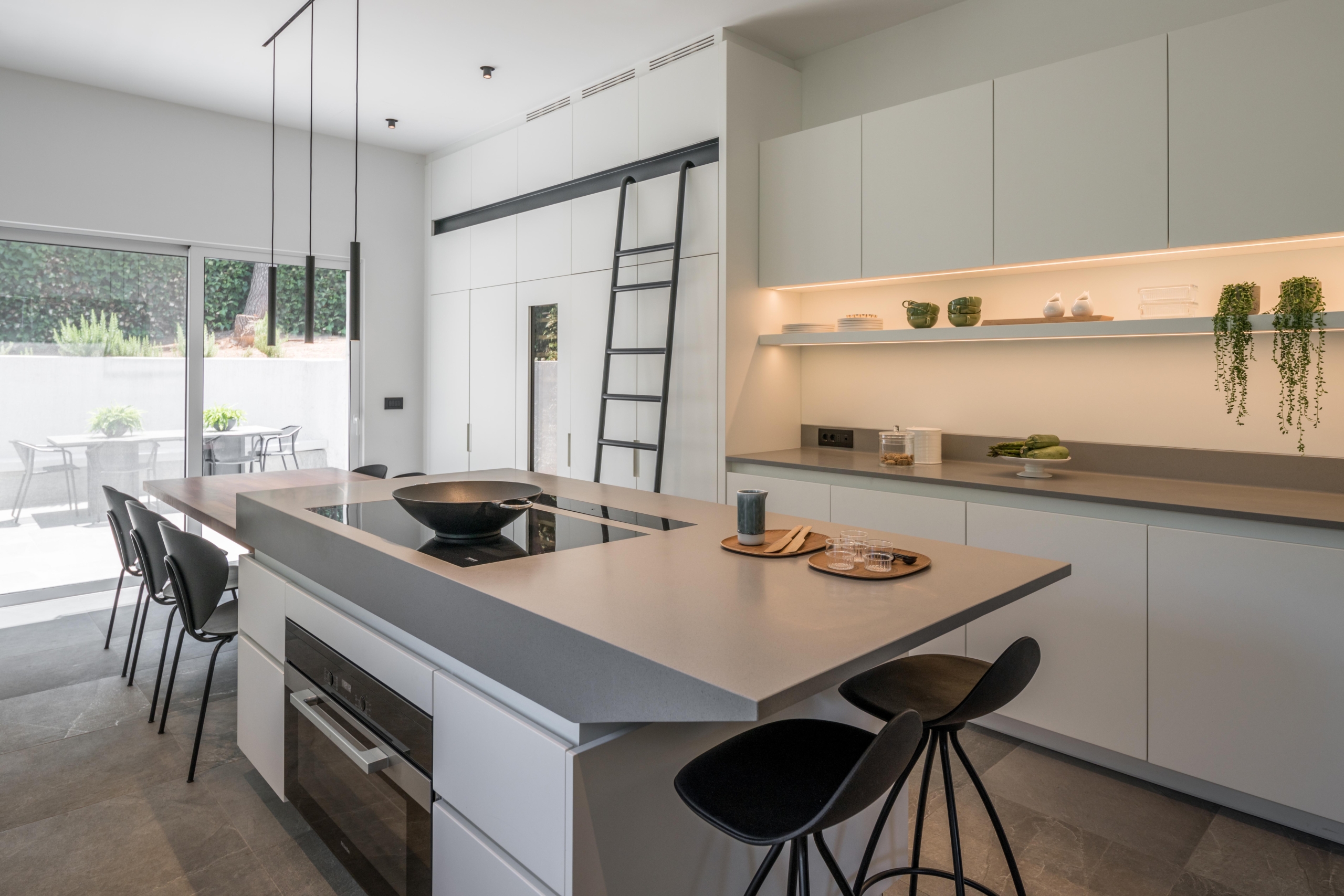 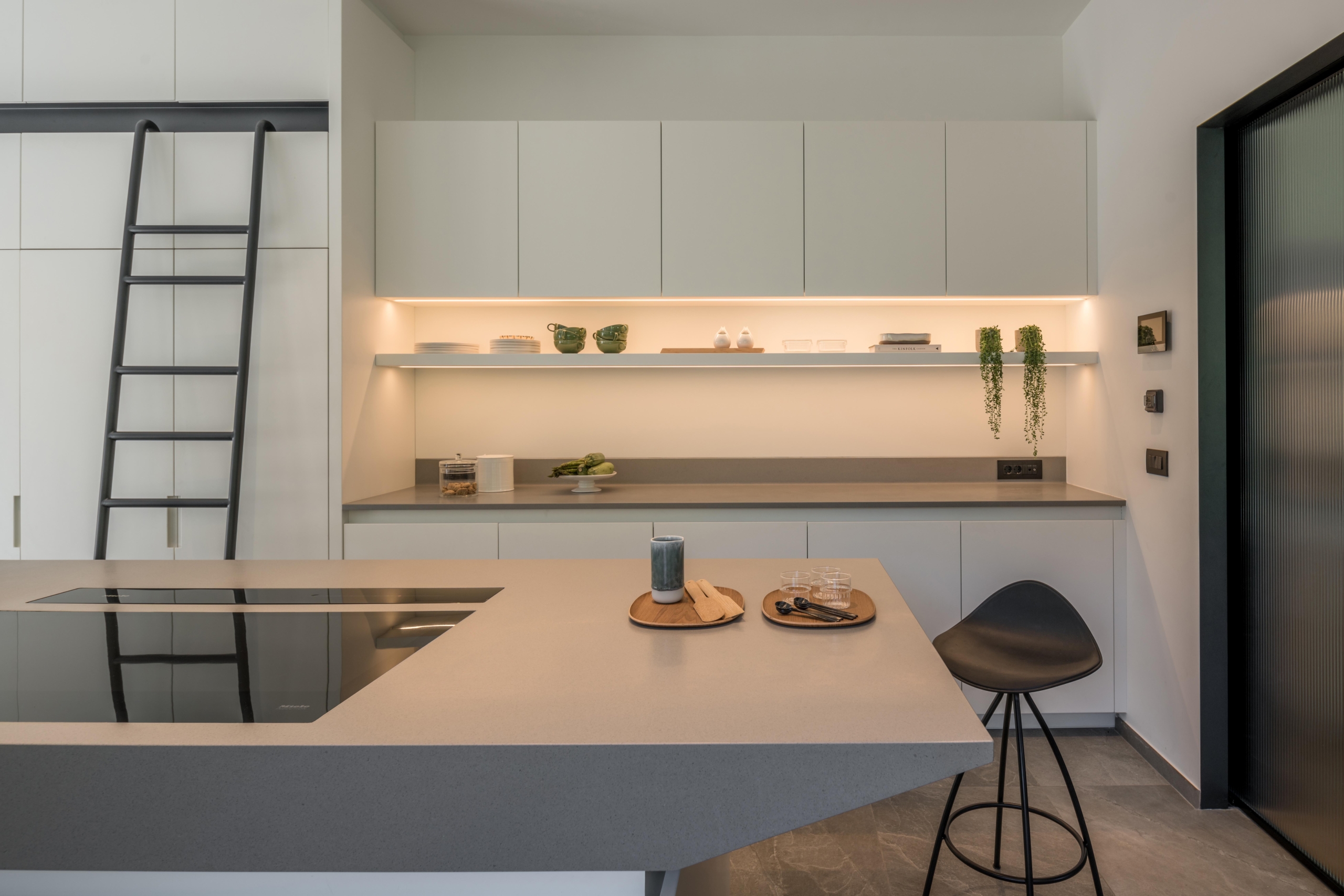 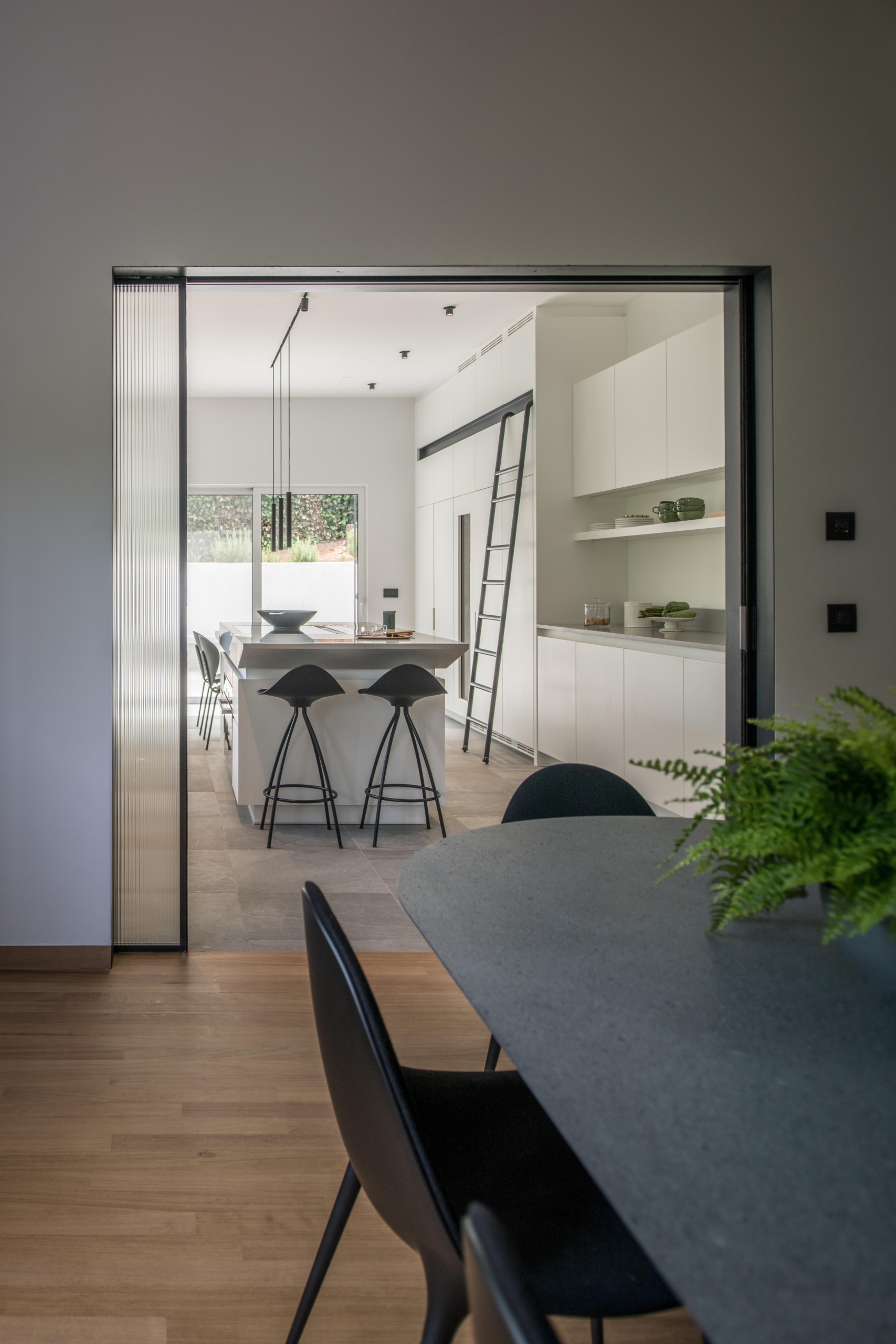 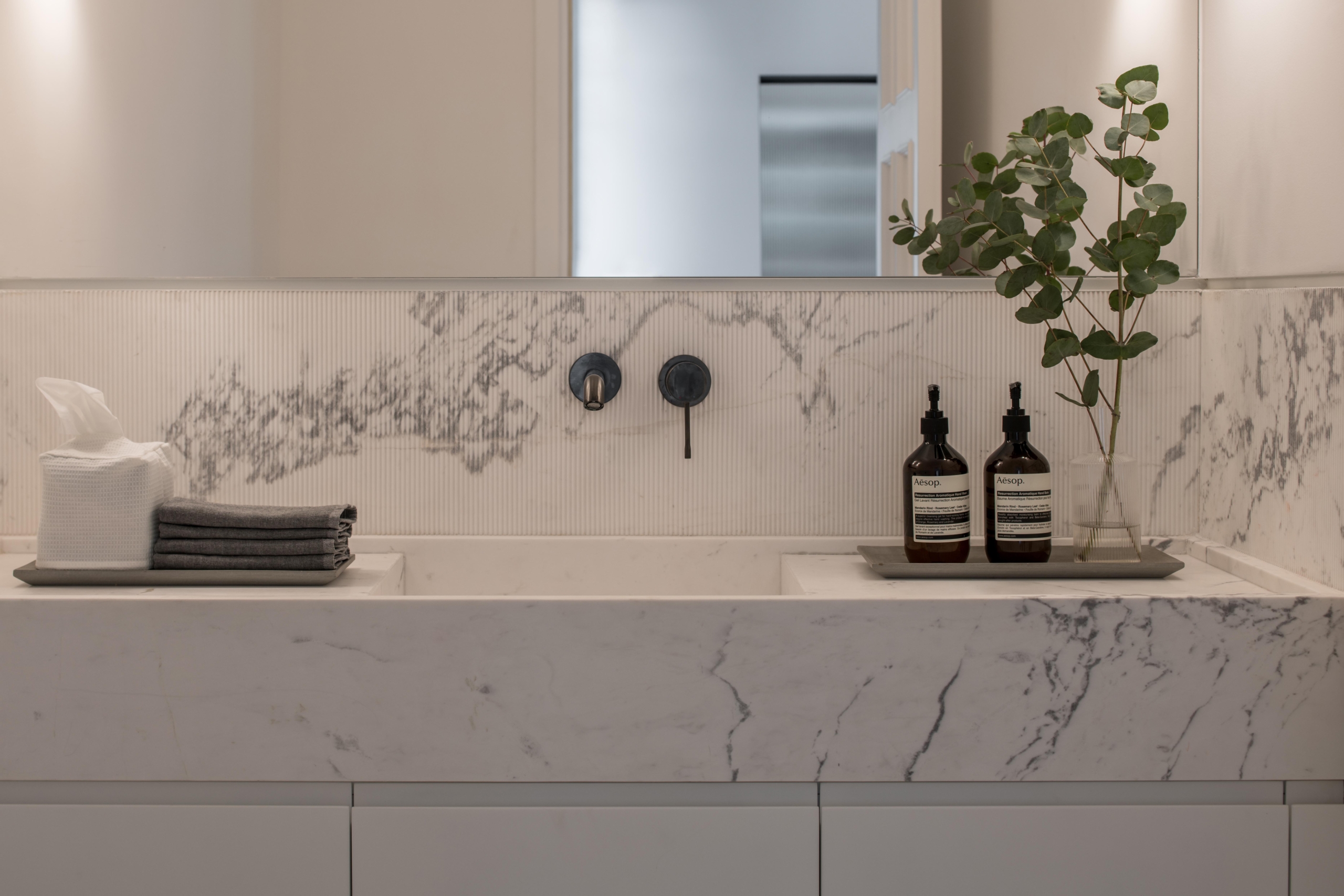 Located in the northern part of Kefalari neighborhood, one of the most compelling parts of the northern suburbs of Athens, the house is literally half set within a steeply sloping hillside. Originally built in the early 1980’s, it was recently passed on to the next generation of owners. With a characteristic slanting tiled roof, typical of the local architecture, and built entirely out of concrete, the house had its most important features intact, such as the Iroko wooden floor and clad pitched ceiling of the main living interior areas.

One enters the property at the top level, it being the second floor of the house where all living areas are located, and takes a flight of stairs down to the 1st floor bedrooms with ensuite bathrooms and an open study area. Another set of stairs then leads one down to the services room and an independent guest apartment with a separate entrance at ground floor level, coplanar to the bottom of the hillside.

The architectural proposal offered an aesthetic update of the residence exterior premises and a full renovation of the interior, while predominantly preserving the existing spatial strategy, with the exception of the kitchen and master bedroom areas that were completely transformed.

The large and luminous, open space living /dining room was consolidated from the original layout but the installation of two ribbed glass sliding doors separating both the kitchen and the pool table room from the main living areas, give the illusion of additional space and impart a sense of serenity and lightness to the interior. As a result, post renovation, the upper floor comprises of an entrance hall, two siting areas, a dining area, a kitchen and a pool table room, all coexisting in an open, fluid continuum. At one’s will, the kitchen and pool table room can be separated behind the translucent glass doors, which while closed, allow only a glimpse of the space beyond.

The concept of an open and fluid space is further reinforced by the selection of architectural materials and colors that also merge in a visual continuum. Inspired by the former interior materials, mat Iroko wood is predominantly used in the interior throughout the house, in floor surfaces, ceiling wooden cladding, steps and bespoke furniture pieces. Gray granite tiles don’t feature in just the exterior, defining all hard surfaces alongside hints of fair-faced concrete. The same granite is used in some of the interior floor surfaces and matches in color and texture the lava stonework set in place by hand to form the new fireplace, dining table and bespoke furniture counter tops, all designed by the architect. Sable black metal makes the main entrance canopy, the new curvilinear staircase banister, the bespoke fireplace bookcase, the sliding door frames in the living room and the continuous linear curtain rail, which is intended to be read as an architectural element. The full-height bespoke kitchen furniture follows the pristine white color of the surrounding walls, while again, all black light fixtures, bespoke design elements (like the sliding metal staircase) and detailing stand out against the white backdrop. Washrooms are all clad in ribbed white Greek marble, or in tiled gray terrazzo surfaces with in-laid white marble, onto which all taps and fixtures again are pronounced in a black mat finish.

The owner’s love of original art deco furnishing is incorporated in the interior (an inhereted collection of their own), combined harmoniously with a set of bespoke furnishings designed by the architect and a selection of contemporary design pieces, such as the Cassina Philippe Starck dining table chairs. While still pertaining to the 1980’s traditional building style of northern Athenian suburbs, the house is currently bestowed with a pared-back, elegant aestheric, where family life is lived “better together”, as the custom-made neon sign indicates at the main entrance. 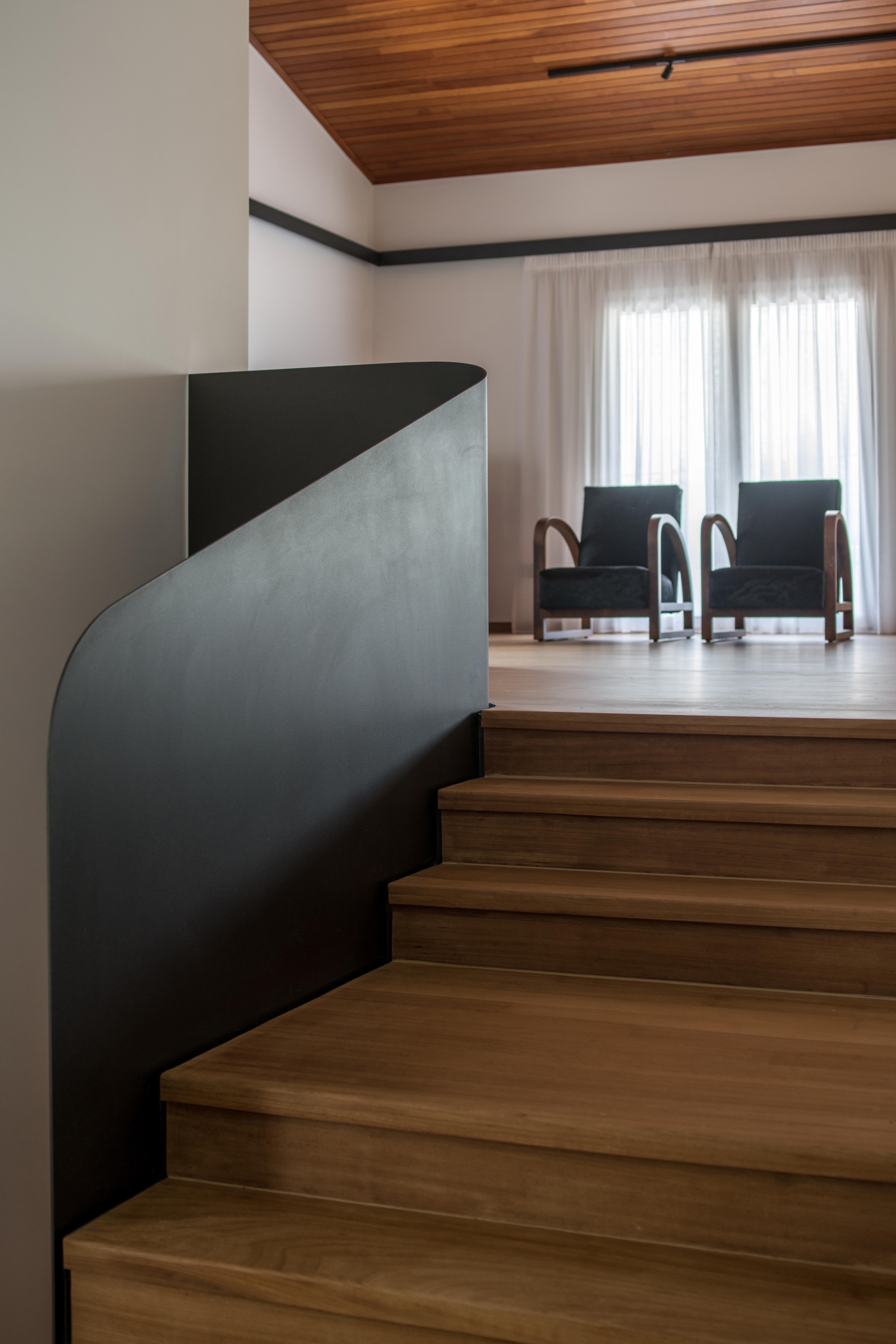 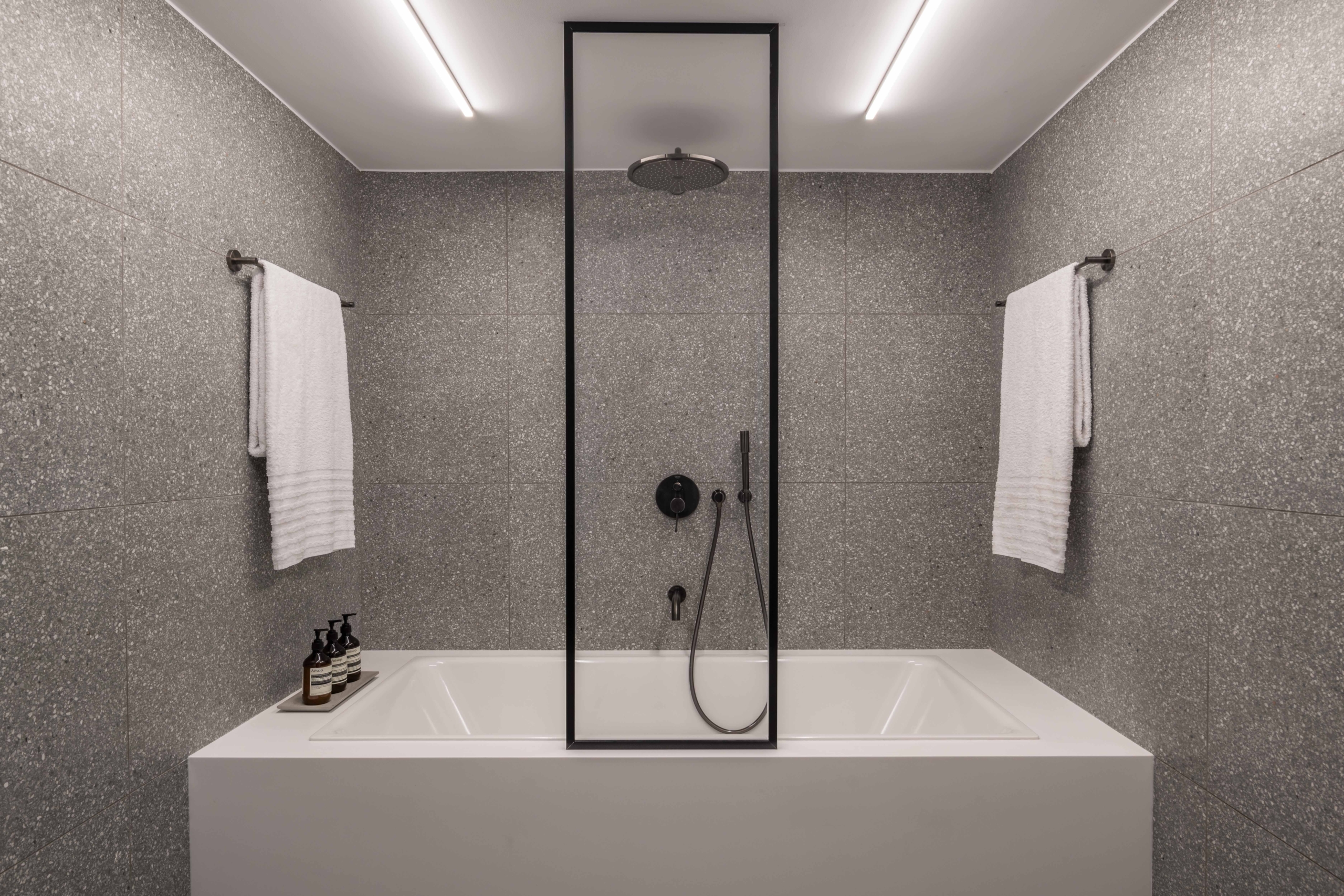 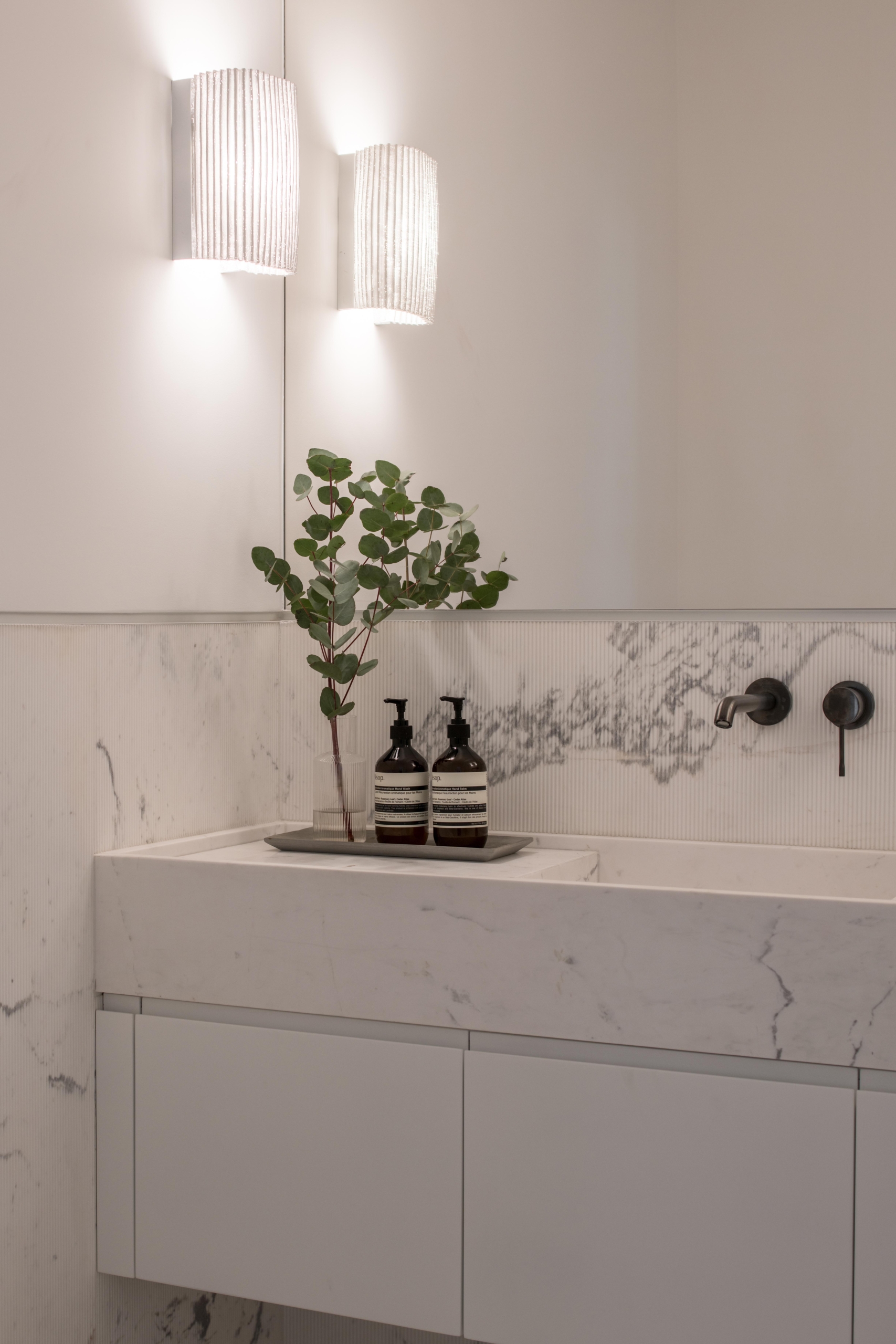 < previous project
next project >
back to top